Most players of D&D are familiar with this little optional rule—when a character rolls a 1 on an attack roll, they not only whiff but hit themselves in the face or send their weapon flying out of their hands, or any number of other harmful or at least embarrassing screw-ups. Of course, it’s not terribly realistic. While someone who’s never held a sword before may do more damage to themselves than the enemy, the majority of people who make attack rolls in D&D are trained—if not expert—fighters. A battle-worn champion shouldn’t be flailing wildly with every twentieth swing.

So if you prefer to run serious, dramatic, and realistic scenes, you’re probably better off doing without critical fumbles. But I’ve always preferred to keep my games on the silly side. There’s nothing like a hero accidentally conking an ally over the head at the worst possible time, or a villain delivering a menacing monologue and then immediately tripping over their own feet. Some of the most memorable moments from my games have come from critical fumbles.

The problem is in finding a quick and dirty way to resolve these moments when they do pop up. Combat in D&D is already a bit clunky and stilted under the best of circumstances—the last thing it needs is another complicated series of tables to slow things down. 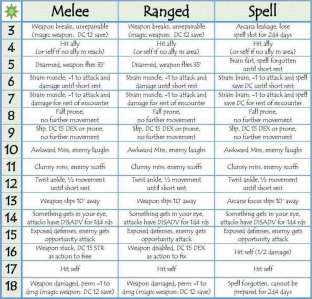 As you can see, some people out there really like their critical fumbles. And if you’re one of them, hey, don’t let me stop you. But after considerable experimenting, the approach I’ve had the most success with is this little table of mine:

Critical Fumble! When you roll a 1 on an attack, roll 1d6.

It may not look like much, but that list is robust enough to trigger some interesting situations without totally derailing the scene. It also works well because about half of the items on the list aren’t all that bad and seem like something even a skilled fighter might do from time to time (like getting distracted by something around them or swinging too wide and leaving an opening for the enemy to take advantage of). And, finally, it has the benefit of being short enough that you can memorize it pretty easily. After a few sessions, you won’t even need the table anymore.

Welp, that’s all I’ve got for today. Happy rolling!