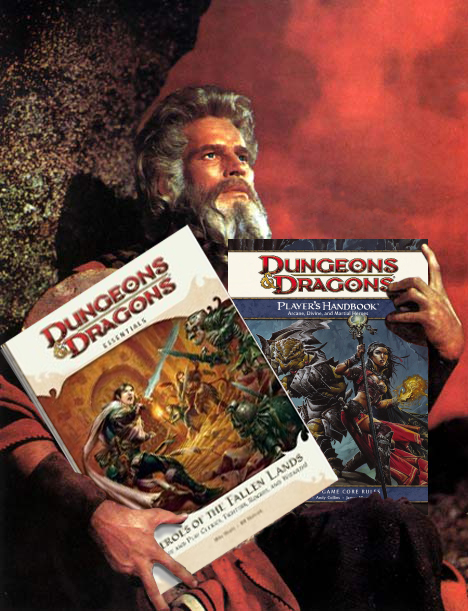 This rant should really be called a “GM Rumination”—it’s more a memo to myself than a piece of advice. But I’ve decided to make it a “GM Tip” anyway, on the offchance other like-minded GMs find it helpful.

I’ve experimented with homebrew mechanics for as long as I’ve been playing tabletop RPGs (holy crap, I just realized it’s been over 20 years). Ahem, anyway—I started homebrewing because I didn’t have the right rulebooks on hand; I just made my own, starting with whatever I could remember from flipping through the books my friends had and throwing in bits and pieces of other board games and video games I had played. Once I had a good set of books handy, though, my main motivation for homebrewing was that the official rules seemed so unnecessarily clunky. I felt that most of them didn’t add anything to the game and could be thrown out.

I made several attempts at building my own systems from scratch over the years. These worked well enough, but they inevitably required tweaking during gameplay as unforeseen situations came up and hidden glitches were revealed. My systems were rarely balanced and lacked the depth of a long-standing classic like D&D.

My inclination toward simpler systems has naturally drawn me to what I’m going to call “improv RPGs,” which encourage the GM and players to make up most of the story without many rules as they go. And that brings me to the point of this rant—those games sound awesome in theory, but each time I try one, I remember that I actually kind of hate them.

Before I explain why, let me make sure we’re on the same page. When I say “improv RPG,” I’m talking about games like The Window and Fate. In Window, players have a set of ability scores and a handful of skills, and the skills are totally up to the players to invent out of the blue. A “skill” in that system is just a phrase describing an aspect of your character with a die assigned to it. The lower your roll, the better the success, so a small die (like a d6) is much better than a large die (like a d20). And that’s it. Those are the rules. There are no concrete rules telling you how to create balanced characters, what to do when a character gets hurt, how equipment could help you, or what spells a wizard can cast… you’re just supposed to resolve each action however it makes sense in the story, with the die roll as inspiration.

For me, there is (or at least used to be) enormous appeal in such a streamlined system. You can teach someone the rules in under a minute and create a character in however much time it takes to write down your concept. Everything you need to know about your character can fit on an index card. No need to buy rulebooks or pause to consult them during play. Most attractive of all, the only limit on the kinds of characters and scenarios you can play is your imagination.

I have no doubt that something like The Window works wonderfully for lots of people out there, but after giving it several tries and having little luck, I went running back to D&D. It’s not that the games I ran fell apart or anything like that—the system worked well enough. The problem was that it was an enormous headache trying to keep the game going. As all GMs know, running a game in any system is a daunting mental exercise. While the players are each responsible for a single character, the GM is in charge of describing and keeping track of literally everything else. Picture it this way: if you’re a player, you’re throwing a ball back and forth with the GM. If you’re the GM, you’ve got to play catch with each of your players while simultaneously juggling several more balls.

When you don’t have a set of rules to determine what happens in at least the most commonly encountered situations, that freedom just adds to the number of balls the GM needs to juggle. Your character was hit? In D&D, I’d just check my monster’s stats, roll for damage, and tell you to subtract the result from your hit points. Describing how the blow landed is an optional piece of narrative flair I sometimes add in for especially dramatic moments, but just as often leave out in order to get on with the scene. The damage carries its own weight. Without any narrative input from the GM, a player winces when their character takes a big hit.

But, in a system like The Window, narration is everything, so I’m constantly having to come up with new and interesting descriptions for how each and every attack hits or misses. There is a loose set of rules for determining when a character loses consciousness, but about half the time a hit has no lingering game effect on the character. Unless the GM decides to impose some kind of arbitrary penalty, there’s nothing in the rules to reinforce the fact that your character is taking a beating. If the narration isn’t suitably dramatic, the event loses its gravitas.

This is just an example. I understand that The Window is not a combat-centric system. But these sorts of problems come up in any situation when using those kinds of rules. Playing D&D, I can automatically figure out what roll is required in most situations and what the roll means, but in The Window, it’s all up in the air, which means it falls on the GM to figure it out on the spot. And that shit is exhausting!

I also understand that systems like The Window encourage the players to share in the role of determining the narrative, but despite constantly reminding my players that they have that ability, they rarely take up the reins. Perhaps it’s because they’ve been trained by systems like D&D, but I find that most of my players prefer to propose an action and let the dice and the GM tell them how it goes down. Giving the players narrative control robs them of a sense of immersion—you can’t pretend you are your character if you are simultaneously deciding what happens to your character.

Another problem with The Window is it lacks tactical depth. When the rules are so streamlined, the players have few options available to them other than simply rolling and hoping for the best. There are no rules for multiple characters trying to work together, for example, or for flanking an enemy. If I want to reward player ingenuity, I’m forced to either come up with a bonus myself or tell the players their plan isn’t going to do any good.

Finally, running a game in The Window makes it difficult to keep things fair and consistent. So much burden is on the GM to invent rulings on the fly that, inevitably, you’re going to make a bad call. I found myself often wanting to undo decisions I had made earlier.

In my longest running Window adventure, I tried to save myself some trouble by coming up with charts for things like injuries and options for tactical combat. That’s when I realized I was basically recreating D&D, but in a much less efficient form. With the set of Window combat rules I came up with, a single attack action required multiple rolls: one to decide if the attack itself was any good, another to decide if the target was able to dodge, a third to decide if their armor could absorb the hit, a fourth to decide what kind of injury they received if the attack finally landed, and a fifth to decide if the character lost health or not as a result. In D&D, you’ve got the time-saving abstraction of Armor Class and Hit Points. One roll compared to a target’s Armor Class to decide if they dodged or if the armor blocked the hit, and a second roll to decide how much damage they take if they are hit. And best of all, the numbers have already been carefully playtested and balanced, and the players will feel the sting of each hit whether or not the GM decides to describe it.

It was that realization that caused me to give up on using The Window and continue the adventure with D&D 5th edition. But, about a year later, I discovered a little system called Fate. Long story short, Fate is considerably more robust than The Window, but it’s riddled with many of the same pitfalls. Too much is left open, meaning the GM and the players are constantly forced to improvise new ideas to resolve even the simplest of actions. Paradoxically, just like The Window, the pared-down rules of Fate end up being more complicated than just having books full of rules in the first place.

And that’s the whole reason I’m writing this rambling rant—to share with you a realization that probably should have been obvious. Systems like The Window and Fate may seem easier, simpler, and faster on the surface, but that’s an illusion. They replace rules with improvisational storytelling, and improv is no easy or simple task. As any actor or comedian can tell you, improv is a difficult skill that takes long sessions of practice to get right. Personally, I think rules-intensive games like D&D already demand enough improv to keep me busy, and learning the rules is easier and faster for me than making them up as I go.

That being said, balance is key. There are lots of systems out there that have far too many rules for my liking. I think D&D has struck a pretty good balance. At least it’s come a long way since I started playing it 20 years ago. It’s much simpler now than it used to be. And I still have my own streamlined homebrew rules that I use when I play. The key, I think, is to find what amount of rules work well for you and your group.

D&D co-creator Gary Gygax once said, “The secret we should never let the gamemasters know is that they don’t need any rules.” And he’s right—we don’t need the rules, but they certainly come in handy. So hats off to you, Gary, whether you think you deserve it or not. RIP.