“Cha-La Head-Cha-La” is the original 1989 opening theme song from the iconic Japanese animated TV series Dragon Ball Z. Kageyama Hironobu energized the theme with his infectiously enthusiastic vocals while Kiyoka Chiho and Yamamoto Kenji composed and arranged the music. But it’s Mori Yukinojo’s lyrics that I want to talk about today.

For decades, English-speaking anime fans have scratched their heads over the “Head-Cha-La” of the song’s title and refrain. But it doesn’t stop there. Mori’s lyrics are full of such perplexing images as dinosaurs dancing on balls and mountains that look like butts. Just what exactly was Mori smoking?

I’ve seen several attempts to explain away the confusion, but I’ve yet to see anyone truly lay it all out and show just how genius I’ve come to believe these lyrics are. Yes, you heard me. This song is secretly genius, and no one’s talking about it.

I didn’t always “get” this song. My first encounter with it was during my college semester abroad in Japan. Reruns were playing on the TV in the common area of our student apartment complex. Of course, like any self-respecting anime nerd, I knew what DBZ was and had seen bits and pieces, but I’d never gotten into it. As far as I could tell, it was just a bunch of characters with bizarre names like Piccolo and Raditz destroying planets in ridiculously overpowered battles separated by long, intense staring contests. So when I heard the theme song for the first time, I was surprised at how catchy and endearing it was. Still, I couldn’t help but shake my head and laugh at the refrain. I assumed “Head-Cha-La” was just one more example of “Engrish”—a hilarious botched attempt at sounding chic by throwing in random English words.

But now that I’ve tallied several more years living in Japan, gotten a graduate degree in Japanese studies, tried my hand at professional translation, and finally gotten around to actually appreciating Dragon Ball Z, I can see how wrong I was.

I’ll go through the song line by line, but first let’s talk about its overall message. Mori Yukinojo’s lyrics are all about the show’s main character, Goku.

Goku’s tough, sure, but his defining trait is his innocent, carefree attitude. Even after he’s married and had kids of his own, Goku remains childish and playful. Mori’s lyrics clearly evoke the whimsical imagination, lust for adventure, and boundless optimism that come with being a kid (or a kid at heart).

With that in mind, let’s get into it, shall we? As we go, I’ll include both the Japanese and the English lyrics. The translations are my own.

The song starts off simply enough—soaring through the sky and taking in the view spreading out far below. Goku can fly, as can many other characters in Dragon Ball Z, and he spends much of his time racing through the air. The “shining clouds” may also be a nod to the kintôun, the golden cloud Goku rides (which is itself is a reference to the Chinese folk character Goku is based on).

By the third line, though, the lyrics are already throwing us for a loop. I can’t totally account for what Mori’s going for here, but I think the basic gist is that Goku or one of the other characters has either leapt off the ground or come crashing into it, leaving a crater behind (as they often do in the show). 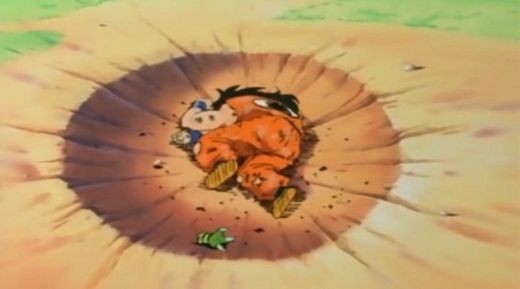 In a whimsical way, you can imagine the Earth might feel as if it’s been “kicked in the face,” and its resulting anger might well set off a nearby volcano. After all, the power to singlehandedly destabilize entire planets is just par for the course for characters in DBZ.

Now we see that the volcano from the end of the previous verse has set us up thematically for melting ice and dinosaurs in this lead-in to the song’s refrain.

The first odd thing to note here is the way “icecaps” is written in Japanese. Listening to the song, the word is pronounced kôri, which simply means “ice,” but the kanji (pictographic characters) that are used to write the word in the official version of the lyrics spell out Hokkyoku, the North Pole. Normally you’d never pronounce Hokkyoku as kôri. Perhaps Mori did this to fit the lyrics to the song’s rhythm, or maybe he was just trying to better evoke the imagery of melting ice. Likely a bit of both.

As for the dinosaur dancing on the ball, this is again meant to capture Goku’s playful and adventurous spirit. If a dinosaur that’s been preserved in the Arctic ice for eons suddenly emerges, Goku’s not only strong enough to easily subdue it, but also silly enough to tame it and train it to balance on top of a ball like a circus animal.

Many have already explained the basic meaning of “Head-Cha-La.” In Japanese, it sounds identical to hecchara (へっちゃら), which means “carefree.” But that doesn’t tell you what’s up with the “Head” part. To understand this, you also need to know that chara can mean “frivolous” or “to clear something away” (as in the expression kari wo chara ni suru, “to clear a debt”). “Head-Cha-La” is a pun that plays off of Japanese and English together. Head chara can be interpreted as having a “frivolous head” or a “cleared (empty) head,” and both interpretations are similar in meaning to “carefree” (hecchara). It may sound like I’m overthinking this, but it’d be difficult to think of a more apt way to sum up Goku’s character, and the idea of having an “empty head” will come up again later in the song.

The next line, though, is my favorite. The phrase “he no he no kappa” (へのへの河童) is another example of wordplay. This one is based on an old idiom: he no kappa (屁の河童). A kappa is a water-dwelling monster from Japanese folklore, and he is a fart. So, literally, the expression translates as “a kappa’s fart,” but the meaning is “not a big deal.” Then why, you may ask, is the lyric “he no he no kappa” instead of just “he no kappa“? Well, the only similar phrase I can think of in Japanese is henohenomoheji (へのへのもへじ). This is the name given to a face drawn by arranging the Japanese letters he, no, he, no, mo, he, and ji in just the right way.

Apart from a silly doodle kids like to draw, henohenomoheji appears on scarecrows, lending the drawing connotations of anonymity or apathy. It also appears on teru teru bôzu, a type of doll children hang by the window as a charm to keep rain away. 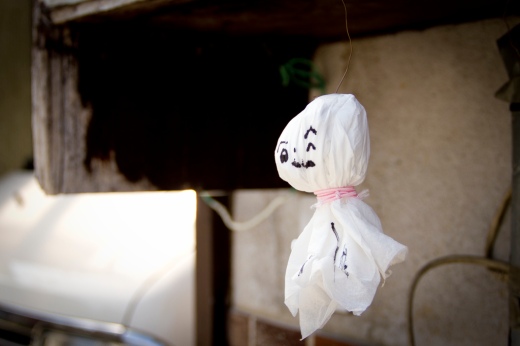 When you combine he no kappa and henohenomoheji, you’re left with a phrase that means “no big deal,” but also evokes images of silly faces, stoic scarecrows, and dolls that chase the rain away. To me, this suggests someone who easily brushes off their troubles, refusing to let anything drag them down.

After repeating the title phrase, the first refrain ends with these lines. The meaning here is straightforward, but there are a few words that are difficult to translate perfectly. Pachi pachi (パチパチ) is a Japanese onomatopoeia indicating a popping or clapping sound—in this case, the sound of one’s heart thumping in their chest. Genki dama (元気玉) is the name of one of Goku’s signature techniques. The literal translation is “Energy Ball,” but in most English versions of Dragon Ball Z, the move is called the “Spirit Bomb.” As for the “Sparking!” at the end, my best guess is that this refers to the flashing light of the Spirit Bomb, but it does seem to come out of nowhere. Unlike “Head-Cha-La,” this one’s probably just good, old-fashioned Engrish.

“Paradise of panic” sounds a bit odd, but the idea here is to evoke the thrill of adrenaline you get from riding a roller coaster. Also, here’s another example of Mori Yukinojo using the pronunciation for one word while using the spelling of another. The word written as “paradise” (rakuen is pronounced sono in the song, which means “garden.” Again, you’d never pronounce rakuen as sono in typical Japanese. This is a bit of artistic license on Mori’s part.

Imagine tumbling through the sky and watching the mountains turn on their heads. If two of the peaks were rather round, they might look something like a butt, especially in the imagination of a child. Rounded mountains are a common sight in Dragon Ball Z, which uses Chinese landscapes as a model for much of its scenery, since the basic story comes from a Chinese folktale. Also, naked butts appear frequently in the show, along with other images and themes considered risque by the comparatively prudish standards of children’s television in the U.S.

Nothing much to say about these lines. No surprises hiding here…

In this second iteration of the song’s refrain, the interpretation of “Head-Cha-La” as having an “empty head” is reinforced by the line that follows it. Moreover, this throws the negative connotations of having an empty head into a positive light—all that emptiness just leaves more space you can fill with uplifting thoughts!

After one last reiteration of the titular refrain, the song ends with this pair of nonsensical lines. You may have to stretch your imagination a little, but an “Ultra-Z smile” can be taken to mean an extremely bright and wide smile, such as the kind Goku is often seen flashing. And, of course, the “Z” is a reference to Dragon Ball Z.

As for the final line, I’m not sure what Mori Yukinojo was going for, but to me it resembles a battle cry, like Tarzan’s yell. Wherever it comes from, it’s full of energy and zest for life, just like Goku.

Well, there you have it. I’m sure my translation’s not perfect, but hopefully now you appreciate this imaginative and surprisingly clever song a little more than you did before.